We had a chance to catch up with Powell artist Aldo Baerten, who recently released a recording of François Devienne’s Six Concertant Duos, Opus 5 for flute and viola.  This new recording is unique in many ways – it is the first recording of this particular opus number, and it is also available exclusively online.  Baerten shared his thoughts on the decision to veer away from physical CDs for this recording.  He said, “More and more, young people download music to an iPad or iPod.  It’s a modern way to sell music.”  He says that if it works well to sell exclusively online, it could be the route he takes with future recordings.

Curious about the repertoire, we asked Aldo how he came to choose the Opus 5 Duos.  He shared that he and violist Diederik Suys had been friends for many years, having performed for 25 years together in the quintet ARPAE (flute, harp, and string trio).  Baerten and Suys decided to play through all of the Opus 5 Duos, which then led them to decide to move forward with a recording.  Since Suys has had his own independent recording label for 10 years, it seemed like a natural choice for the duo to record and sell online.

Aldo mentioned that his friendship with Suys also led to the choice for a recording location.  This new recording took place in a chapel where Suys has his own concert series, and which Aldo notes, “has very good natural acoustics.”  Aldo also told us that there is quite a lot of repertoire for flute and viola – and he has played quite a bit of it!  He said that he and Suys will also make another recording of flute and viola repertoire in the future.  As for the instrumentation, Aldo shared his thoughts, noting that the flute and viola duo is “Very classical, very transparent, and a very natural way of writing.  The flute carries the melodic line, and the viola serves as the bass.  As a flutist, you don’t have to force or exaggerate, and the two instruments blend very well together. “

Finally, we asked Aldo about performing with Suys since they has been friends for so long.  Aldo told us, “It feels like coming home when you can record with someone whose playing you know.  You can enjoy playing together, and you don’t have to search – it comes in a very natural way.”  This sounded wonderful to us!

The new CD is available at http://www.ut3-records.com/records/ut3-024.  For more information on Aldo Baerten, visit his website at http://www.aldobaerten.be/index.php and his Powell artist profile page at https://powellflutes.com/academy/masters/aldo-baerten.

Posted by Powell Flutes at 11:35 AM No comments:

As teachers, most of us regularly incorporate technical studies and scales into each student’s lesson. However, I think every student reaches a point in their growth that technical exercises can feel a bit tedious and redundant. I find that students may feel less motivated to practice scales if they can’t immediately see the benefit or the changes in their technical ability.

A large number of my current students are middle school age or younger, and I found it to be a bit of a struggle to get them excited about improving their technique. I have previously used a Practice Challenge to help my students learn about efficient practice and to get them excited about dedicating time to their flute, so it seemed logical to take the same approach to scales. In my studio, a “Challenge” often implies a personal journey, rather than a contest between students. I encourage each student to challenge their expectations of themselves, as well as their perception of what they can achieve. In both challenges addressing practice and scales, most students were shocked at how much they could accomplish while actually enjoying the work. 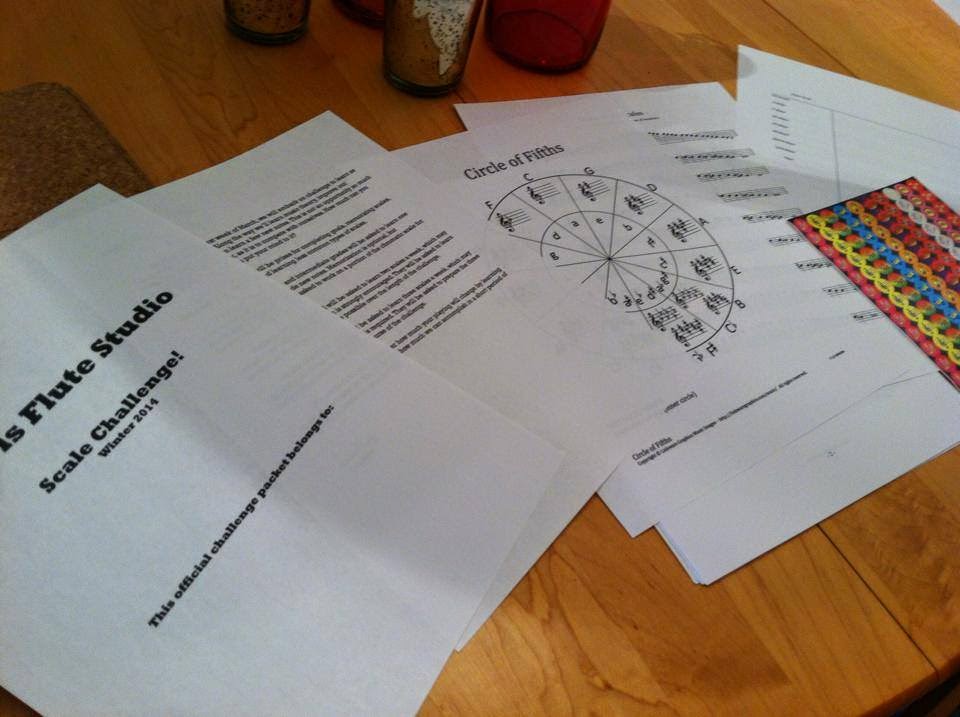 Since I felt most of my students needed a crash course on basic scale practice and theory, I made the challenge eight weeks long. Each student received a packet outlining the expectations (this was determined by age group, and then tailored in each lesson), the circle of fifths, major scales, minor scales, and “unusual” scales like pentatonic, blues, whole tone, etc.. In the back of the packets, I included charts for major scales and minor scales. For the duration of the challenge, the students began each lesson with their scales, and we kept track on their charts which ones they “passed” and memorized. I also had a grab bag of “prizes” that students could choose from each week if they completeld their challenge assignment. These were small items like stickers, erasers, pencils or candy, but they add an extra fun element to all the hard work.

As the challenge progressed, I was amazed at the numerous benefits for the students beyond the obvious things I expected. Students who have struggled with completing weekly assignments were coming to lessons fully prepared, sometimes even having done more than they were asked. These types of students were extra motivated by having a chart to mark off each week where they could see their achievements. In addition to providing a learning platform for practice, the challenge motivated everyone to learn new notes (or, in the case of most of the older students, to polish their third register technique).

Students became curious about what their friends were achieving and took on a healthy approach to competition, feeling motivated by the knowledge that many of their peers were working ahead. One of the most surprising results of the challenge was a young student who was so shy she would barely speak to me in her first lesson. Although she has been coming out of her shell over the course of the last year, I have struggled with getting her to try new things. With the motivation of marking off her chart and a weekly “prize”, she took on a whole new approach to flute, genuinely making an effort to learn new notes and change physical elements of her playing, and losing some of her fear of trying new things.

Beyond the growth in my students, talking so much about theory in lessons was a wonderful opportunity for me to grow as a teacher. This is a topic we discuss occasionally, but I certainly learned about my teaching as I prepared lessons on theory almost weekly. I look forward to integrating this challenge on a yearly basis, adjusting the requirements as my students technical abilities continue to improve. If you feel it is appropriate, you could implement a variety of metronome and memorization requirements, scales in intervals, and even weekly tests or a final test to pass the challenge. By the time we reached the end of our eight weeks, my studio had learned 141 scales and 54 new notes. Two students memorized everything they did, including one of my youngest, first year students (who learned 9 memorized scales and 14 new notes, having only played the flute since October!). 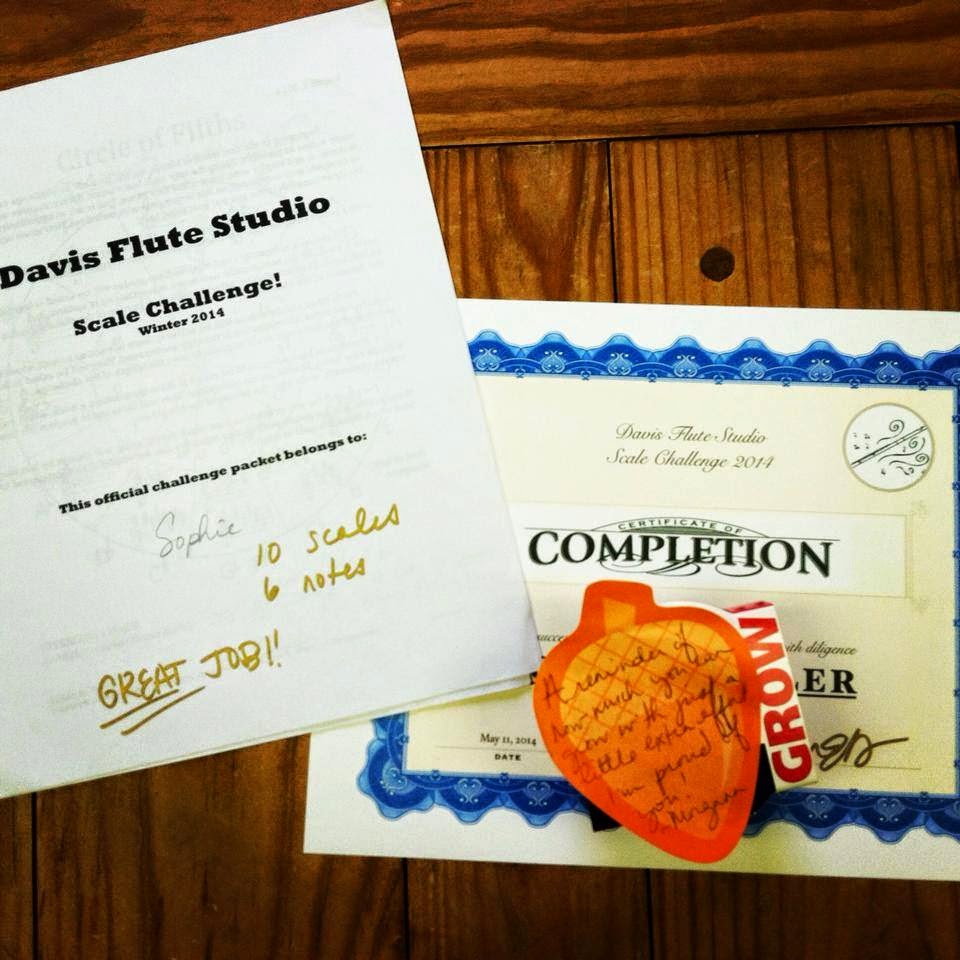 I recognized each student at the end of the challenge with a certificate and small gift, because I believe in encouraging a strong work ethic by acknowledging their willingness to work hard at something new. This activity became much more than a tool for learning scales, but also a motivational tool, a lesson in goal setting and personal expectations, an opportunity for achievement recognition, and a way to learn about healthy competition amongst peers in a supportive environment. After taking a break from intensive scale study for two weeks following the challenge, I even have students asking me when we’ll start learning new scales again!

For more on Morgann Davis, visit her website at http://www.morgannelycedavis.com/.
Posted by Powell Flutes at 5:28 PM No comments:

The third and final in a series of videos on the Andersen Studies, Op. 15 by Powell artist Paul Edmund-Davies covers etude number 3.  Mr. Edmund-Davies remarks that this etude "has to be one of the most beautiful studies ever written for the flute."  That being said, he focuses on the melody in the first part of the video and recommends practicing the melody as lyrically and vocally as possible.  The melody is complimented by an accompaniment of sixteenth notes and triplets, which Mr. Edmund-Davies recommends you build up in blocks.  Finally, he notes that the fingers "must be nimble" to play the etude successfully and suggests a few of the studies from his book, The 28 Day Warm Up Book, to help.

Posted by Powell Flutes at 5:02 PM No comments: 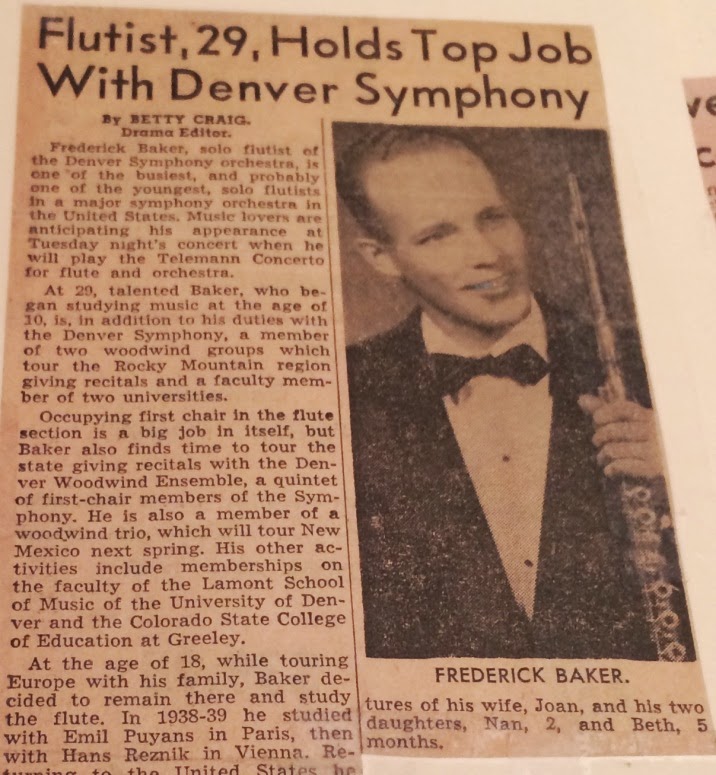 
Every Powell flute has its own unique character and it is up to the player to discover it. Every day of my life I worked to find it. Even after very successful concerts, I would go back home and feel like there is something more to be discovered. My flute was always teaching me something. - Fritz Baker
These are humble words coming from one of the greatest flutists of the 20th Century, Mr. Frederick H. Baker. To hear someone say “there’s always more”, even after 94 years of age, is quite special. Mr. Baker’s philosophy had a great impact on me when he spoke with me recently over the phone.

Calling from his home in Arizona, he was kind enough to answer my questions about his illustrious flute, #900. I was pleasantly surprised to hear him talk about how the flute impacted his life, rather than about its gorgeous features. He told me how incredibly grateful, even how indebted, he was to his instrument for showing him things about himself that he didn’t know existed.

Mr. Baker’s words are a pleasant reminder to us all that playing the flute can be more than just the right notes, the loudest notes, or the fastest notes. Performance can be deeply self-revealing. It can push our boundaries, heal our wounds, and connect ourselves with those around us.

To pursue that challenge was a lifetime gift. Powell was a Godsend. - Fritz Baker

Frederick “Fritz” Baker served as principal flute of the Denver and San Diego Symphonies for many years. Never one to personally boast, many of his esteemed colleagues and conductors would happily do so for him. During a rehearsal of the San Diego Symphony Orchestra, renowned American conductor Robert Shaw stopped the players and said, “I have been wanting to say this for a long time: I have never heard a more beautiful tone on the flute. You should all be proud to have Baker playing with you. For my money he could play in any orchestra in this country”.