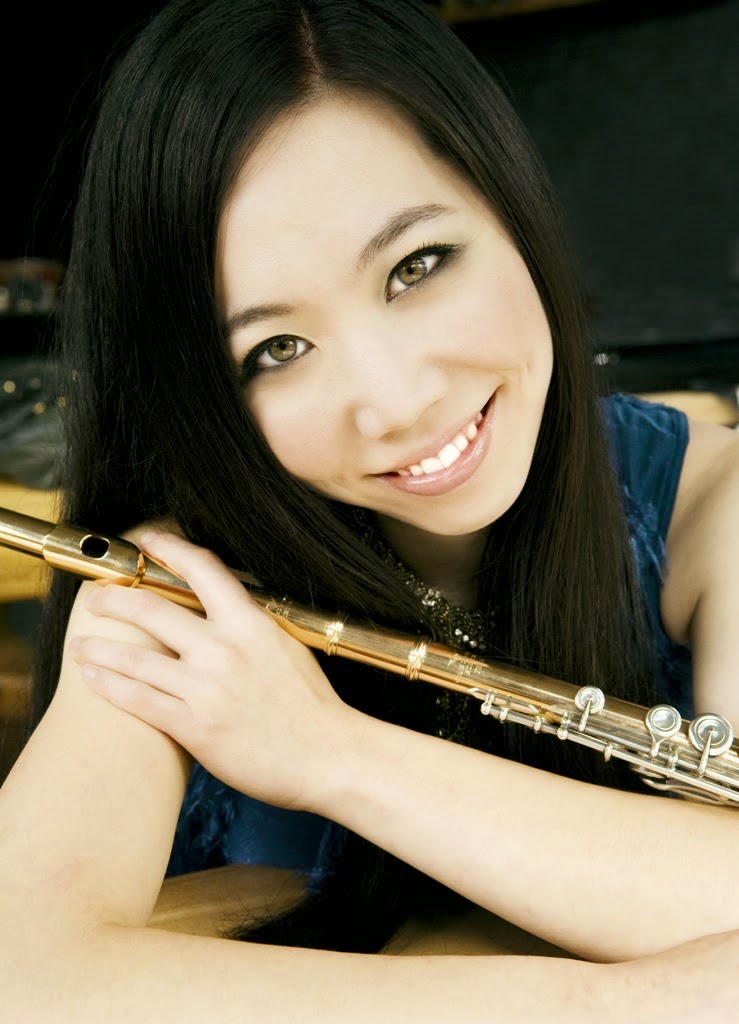 International soloist Sooyun Kim recently joined the Powell artist family and is currently a member of The Chamber Music Society of Lincoln Center.  Born in Seoul and raised in the United States, Ms. Kim made her debut with the Seoul Philharmonic Orchestra at the age of ten.  She has performed as a soloist with The Boston Pops, New Jersey Symphony Orchestra, Münchner Rundfunkorchester and Münchener Kammerorchester.  Ms. Kim is also a recipient of the Georg Solti Foundation Career Grant and became the first American since 1964 to win a top prize at Munich’s 2010 ARD International Flute Competition in Munich, at which she was also awarded a Special Prize for the best interpretation of a commissioned work by Bruno Mantovani.  She received her Bachelor of Music, Master of Music, and Graduate Diploma from the New England Conservatory of Music, where she studied with Paul Robison.  Follow this link to read her complete bio on her Powell Artist Profile page.

In the following interview by the Chamber Music Society of Lincoln Center, we learn more about Sooyun Kim, including which career path she may have chosen had she not gone into music.  She also tells us about her current favorite book and recording -- but when she recollects her favorite Chamber Music Society memory, it is truly touching and inspiring.

Posted by Powell Flutes at 10:03 AM No comments: 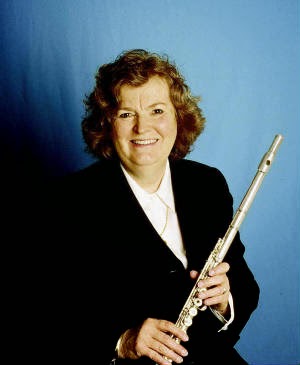 Over my years of teaching, I have changed very few student's embouchures. I prefer to think of embochures evolving into what the player needs to be successful. We certainly will not all look the same when we play in the third octave or when we have quick wide interval skips.

You must remember that each of us is a different size--I have students ranging in size from 6'4" down to elementary sized students. Yet, we play the same sized flute. Each of us has a different face--some lips seem to aways be in a smiling position at rest--others have more of a downturned expression and then most of us are a combination of the two--one side up and other side down. So, obviously each of us will look different when we play the flute. Do check out the flute embouchure pictures for Roger Stevens' book ARTIST FLUTE on Larry Krantz's web site. Each of these players has a professional sound, but look at how differently each is set up.

I would suggest you let your ear direct your embouchure changes. Work for sound and agility and when you have it where you want it, you will look like what YOU need to look like to get the best results. Playing lots of harmonics will help you in this area. I prefer playing the Marcel Moyse DE LA SONORITE at the harmonic (third partial with the lowest note counting as partial no. 1). For me, I get a much better and quicker benefit from doing the book this way.

Control in the third octave is as much about the air stream as it is embouchure. Size and speed--two important air stream S's. Most problems occur when the flutist does not keep the air stream moving. When things begin to sound rough, they stop blowing and everything gets worse.

Playing and practicing a lot in the high range will help you feel comfortable. Besides doing the Taffanel and Gaubert 8va--check out Thomas J. Filas--Leger Domain and Top Register Studies. I have the students double and triple tongue each note the first time through these books. Then various rhythmic patterns before setting in with the slurs. Practice with a metronome at both slow and fast settings. Control is being about to play very fast and very slowly.

Posted by Powell Flutes at 10:43 AM No comments:

Quest for A Flute: From ‘No Doubt’ to a Surprise Flight

Martha Long, Principal Flute of the San Antonio Symphony Orchestra, attended the NFA 2014 convention in Chicago with one intention: to purchase a new flute.  After trying a huge array of instruments, she chose fifteen finalists, and through the gracious help of Carolyn Nussbaum, we found ourselves in a private room, listening to the same orchestral excerpts over and over again on those flutes.

I taught Martha for seven years during her teens. Martha asked me to listen, along with her flutist friends Matthew Roitstein and Ben Smolen as well as a pianist friend, so I happily spent most of this convention hearing her play the same orchestral excerpts over and over.  We narrowed it down to four instruments, but I wasn’t fully satisfied. Martha sounds good on any flute, but I wanted her to sound spectacular.  So I practically pushed Carolyn out into the hotel hallway, and said, “Don’t you know of some fabulous instrument, something that will be even better than those she’s playing now?” I knew that Martha’s flute was to be a gift from her parents, and they had impressed upon me that they wanted the very best for Martha.

Carolyn energetically pointed her index finger up in the air, saying, “Wait!! I’ll be back in five minutes!” ---- and whoosh! ---- she ran off down the hallway. I casually wandered back to my seat in the room, and when Carolyn returned, she had another instrument to add to the mix.

We went through yet another round of testing. I didn’t know how Martha had the stamina. No one, including Martha, knew what brands we were hearing. And then ------ one flute stood out so far beyond the others, it was clear beyond doubt.

“What flute is this?” we all wanted to know. Mary Lyons, a flute specialist who works for Carolyn, had been ably assisting us, and announced it was a very special Powell flute. Carolyn had known about the existence of this specific flute since the Spring and brought the instinct, knowledge and experience of her many years in the business to believe this would be right for Martha. Martha sounded amazing: as amazing as she always humbly describes her colleagues and friends as sounding.

Martha worried about the wisdom and the expense of purchasing such an elite flute. I asked her some tough questions: What is your highest goal for the next ten years? Her answer: “To sound better each day than I did the day before.” Does this flute sound like you? “Yes.” Do you want to go back to work and have people notice you have a new flute, or do you want to turn heads? “I know that I want to share this instrument with my family, friends, and colleagues, and I want this flute to be a voice in my orchestra.”

Well, then, which instrument will help you meet these goals? And gradually, along with speaking to the Powell staff, Martha embraced the idea that she could allow herself to fall in love with this flute.

Martha was so overcome with gratitude that she could not think of a better way to thank her parents than by visiting them and showing them the flute in person. So she switched her flight from Texas to my flight to North Carolina. The mischievous part of me told her, “Don’t inform your parents that you’re coming, Martha! Surprise them!”

My husband met us at the airport and we drove Martha to her parents’ home. We stayed at the car so Martha could have a moment with her parents. She walked into the house and we could see her parents’ mouths drop open in utter shock. “What are you doing here?” exclaimed her mother. Her father was simply speechless. At that point we were invited in, and watched Martha show the flute to her parents. She played Bach. The joy and love between them was a pleasure to see. Oh, except for Martha’s cat, Lola, who was staying with her parents and doesn’t care for Bach.

Martha is now playing on her Powell gold flute in the new Tobin Center for the Performing Arts in San Antonio. The orchestra members and music director are all thrilled with Martha’s new instrument. She is giving a recital in December presented by Camerata San Antonio, and I will fly there to attend. This time she is going to surprise me, she said, with her dress. I wonder what that might mean!

Maintaining such a close relationship with a former student, one who is as kind, considerate, and fun as Martha has brought me more joy and satisfaction than I can  describe. Helping, even in the smallest way, to find her way to this Powell flute, was a rich experience.  Except for previously contributed articles to the Powell blog, having a few students purchase Powells through Carolyn Nussbaum, and being acquainted with Powell’s friendly staff, I have not been associated with Powell previously.

Thank you to all the wonderful people who were a part of this story: Martha Long, Janet and John Long, the staff at Carolyn Nussbaum Music Company, especially Carolyn Nussbaum, Mary Lyons, and Carolyn’s mother Shirley, the staff at Verne Q. Powell Flute Company, Martha’s friends, and, as always, my chauffeur and husband Fred.

Helen Spielman is a performance anxiety coach who taught flute for 24 years. Her passion is to help musicians maximize their highest potential on stage. She teaches positive self-talk for performance, self-compassion, the alleviation of perfectionism and worry about others’ approval, concentration, and consistent performance.  Helen works with musicians, moms, and business executives internationally via Phone and Skype. Her popular book A Flute in My Refrigerator: Celebrating a Life in Music is selling prestissimo and is available on Amazon as well as at flute specialty stores. Please visit http://PerformConfidently.com for more information.

Posted by Powell Flutes at 2:49 PM No comments: