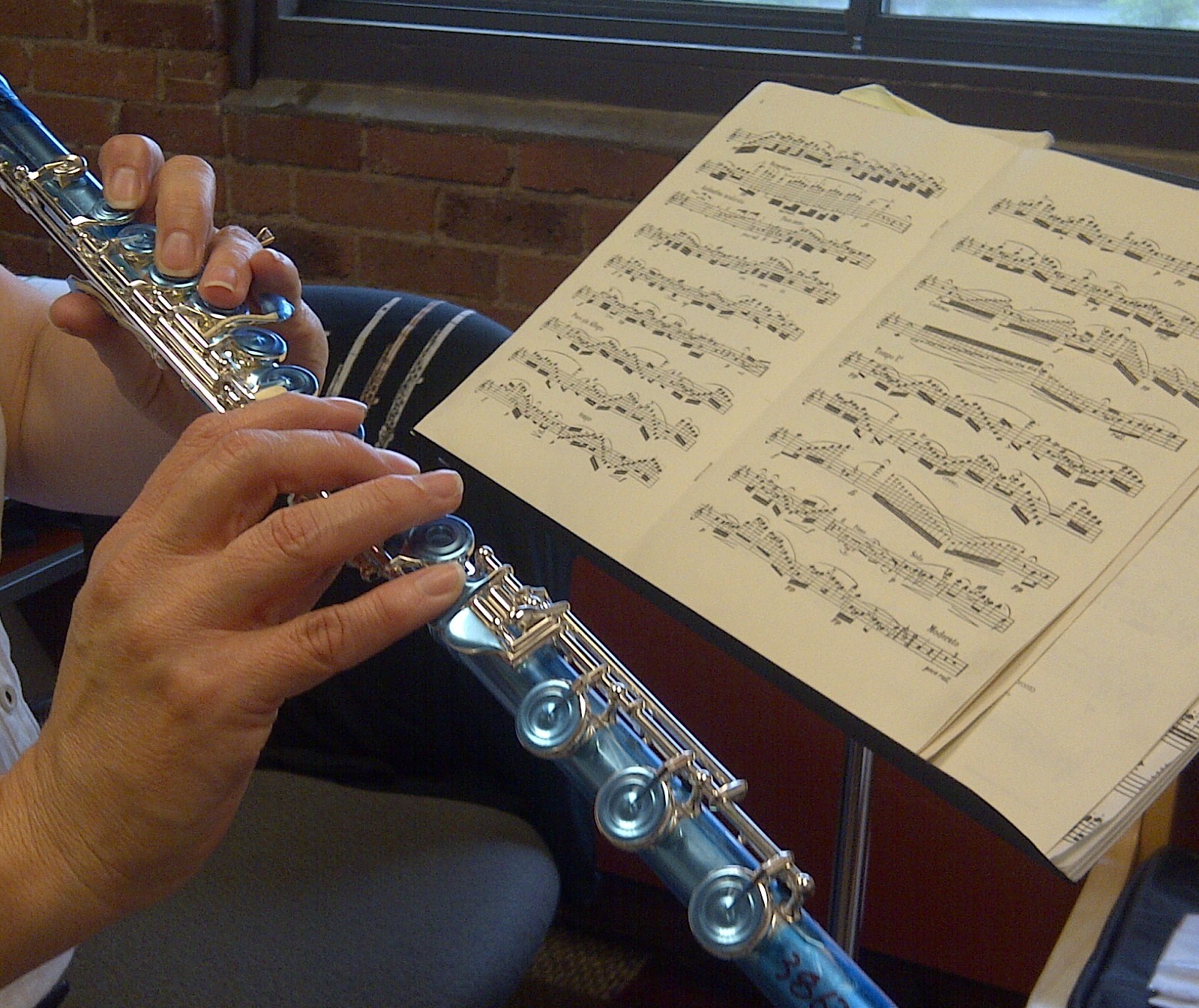 To many flutists, the idea of being a flute tester seems to be the perfect job.  After all, who wouldn't love to play great flutes all day long?  If you're an undergraduate or graduate student, or a pro flutist out in the field, and have wondered what it's like to be a tester, we met with a few testers to find out...

At Powell, being a tester may be part of one's total job.  For instance, the two testers we spoke with are the Customer Service Manager, Rebecca Eckles, and one of our finishers, Lindsey McChord.  We asked them both what it's like to be a tester, and what the differences are between testing and performing.  Rebecca told us that when you are a tester, the focus is completely on the instrument -- not your own individual performance.  She says you need to be very consistent as a tester, so she has the very same repertoire and exercises that she uses for each flute.  When a flute is finished, Rebecca tests it a few times.  The first test is very mechanical, evaluating how the flute itself is functioning.  Then, the finishing department makes any necessary adjustments, and she tests the flute again.  In the second test, she said she focuses more on acoustics and response.  If more adjustments need to be made, the flute goes back to the finisher -- and then on to her for more testing. The adjustment and testing process continues until the flute is 100% ready to go.  Lindsey also has the same procedure and tells us that she will test flutes no fewer than 2 times and sometimes 3 or 4.

We had a bit more time to chat with Lindsey, who came to Powell after receiving two performance degrees: a Bachelor of Music (BM) from the University of New Hampshire, and a Master of Music (MM) from the Longy School of Music.  We asked Lindsey what elements of her studies have proven helpful in her work as a tester.  She said, "It's vital to be aware of yourself as a player, what your capabilities are as a flutist.  This is crucial in testing, because if there are problems, you have to determine if the issue stems from you (as a flutist) or from the instrument itself."  She agrees that in testing, everything centers on the actual instrument.  Even though your own performance skills are important, Lindsey said,


"You have to take yourself out of the picture.  Testing is all about the instrument rather than how many times you can play something perfectly.  Also, you have to put your own preferences aside.  You don't know who the flute it is going to, so you have to keep in mind that it might be someone who uses, say, less air or a lighter touch."

Since testers do have to play the same pieces and exercises each time to keep everything consistent, Lindsey mentioned that knowing the repertoire (like Bach, Dutilleux, and all the studies from the French School) helps tremendously.  She particularly likes the Dutilleux "Sonatina for Flute and Piano" and uses it to really put the flute to the test.  For Lindsey, the piece "has some passages that are extremely difficult, so you can really isolate the difference between (issues with) the flute and yourself.  If I can play the easy passages, I know the flute is in good shape!"

As a finisher herself, Lindsey feels that she, personally, also has to put her finishing skills aside when testing.  When she is testing, she needs to determine how the flute feels, how it plays, and how it looks.  Although it can be challenging not to avoid "diagnosing problems" since she is a finisher, she doesn't test her own flutes.  If she does find an issue, she says she wants the finisher to know exactly what she is hearing, and that way, the can determine what needs to be done.  She says, "I try to give them the overall picture" and provide the feedback that a customer would give.  Even though she, personally, could make adjustments in her playing to compensate if needed, she sets that training aside to provide an objective evaluation.
Posted by Powell Flutes at 11:57 AM No comments: 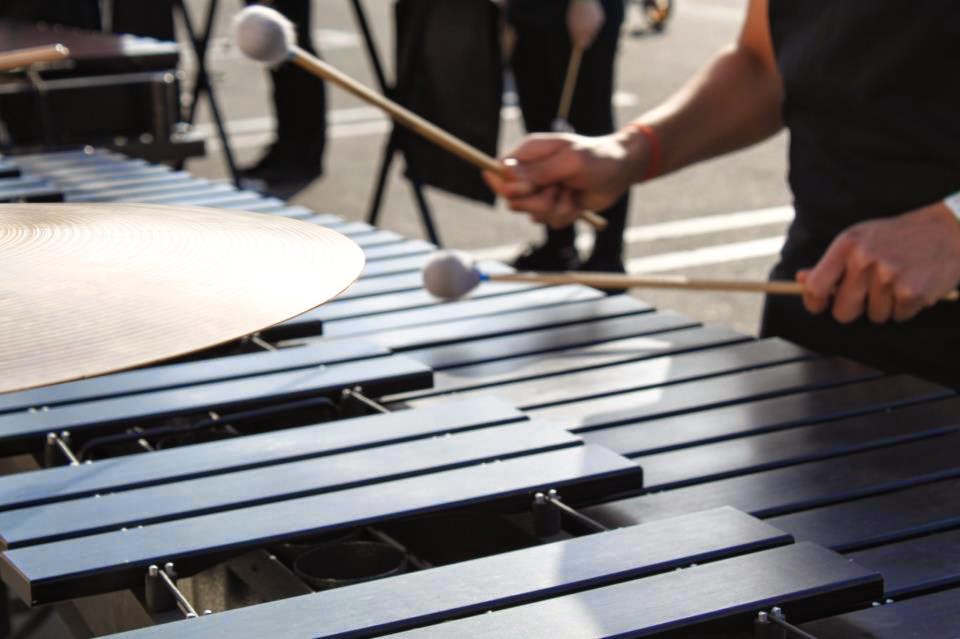 
As I was growing up my family listened to every kind of music there was; the Beatles were the backdrop to our Sunday mornings, orchestral music played during dinner, jazz before school in the morning to get us moving, my father singing Italian aria's in the kitchen while the smell of garlic wafted through the house.  Music was a living, breathing part of our family every day, every hour.

As a college flute major, I found that many of my colleagues focused their listening on recordings by solo flutists.  My CD player was filled with every other kind of music but flute! While there is much to be learned from our fellow flutists, there is a larger world of musicians that can expand our perceptions of sound, if we are willing to listen.

Percussion is apart of that larger world.  Paying close attention to percussionists and the sounds they draw from their instruments, can accelerate our growth as flutists from many perspectives.  Listen to the recordings of Keiko Abe or She-E Wu, you will hear nuances that you would not have believed possible from a marimba. In your practice, try to imitate the sound of a marimba sustaining a single note, the impact of the mallets on the bars is akin to our vibrato.  How even is it?  How much attack is the player using?  Listen to a wind chime, can you mimic the sound in your scales or technical passages?  Chimes create the ultimate in bell tones, how closely have you listened to their decay and can you mimic it?

Flutists must have the ability to be chameleons in any ensemble. The ability to blend in to a sound that is dissimilar to our natural tone is one that must be practiced and honed.  The first step is listening to instruments that are dissimilar to ours and understanding their sounds.  If you can make a flute sound like a snare drum, you are on your way to greatness!
Posted by Powell Flutes at 10:03 AM No comments:

Jumping Out of "The Flutist Pile" Mentality


Yes, We Play the Flute, BUT WHO ARE WE?  Who are we EACH? Can we all be jumbled into one pile called "The Flutist Pile" and summarized into a few characteristics? Absolutely NOT.

Here is a quote I found, of which I LOVE by Leo Bascaglia, "Labels are a distancing phenomena- stop using them! And when people use them around you, have the gumption and the guts to say, "What and who are you talking about because I don't know any such thing." ... There is no word vast enough to begin to describe even the simplest of man.  But only you can stop it.  A loving person won't stand for it.  There are too many beautiful things about each human being to call him a name and put him aside."

And so this post is an invitation!  You are invited to
1) notice all the wonderful and beautiful things that make you, YOU
2) notice all the unique characteristics about each flutist in your flute studio! and
3) begin to communicate a love for the individual artist in each flutist to the people around you!

This perspective is going to contribute greatly to your BRAND when launching into your careers!  And if you need help, please write people asking for a few words on how they would describe you!  Also make a list of things you love and are passionate about!  I knew a great colleague who had a passion for serving veterans and started a not-for-profit organization/ brass quintet dedicated to performing for veterans!  I knew another awesome spirit who played jazz drums and had a passion for performance and music education.  He started a project to bring jazz programs to students across the country.  :0)

I always say, I am not the flute's instrument, but the flute is mine!  Haha!  What have you got to say, young artist?!  What makes you, YOU?!  What do you LOVE?!

So, YES, as you dive into summer adventures, take it as an opportunity to answer these questions!

Photo attached of this quote by Mr. Bascaglia and please notice the very awesome blog cited in left of photo called "Brainpickings". 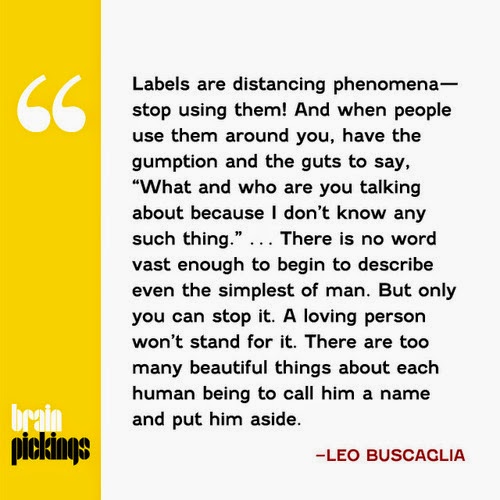 Leo Buscaglia on education, conformity, and how labels limit our capacity for love – absolutely magnificent and timelessly true gem from 1970
http://www.brainpickings.org/index.php/2014/05/19/leo-buscaglia-love-labels/

Posted by Powell Flutes at 4:28 PM No comments:


There are lots of pedagogical articles advocating 'the right way' to sit and stand. It is always interesting to note that most players never consciously think about their posture in the creative moment: what is practiced every day just happens as a matter of muscle memory. When we teach, we need to remind students about ergonomics so that they learn how to sit/stand in the most efficient and relaxed manner when they practice and perform. For lesson and solo performances, as well as daily practice, standing is the preferred stance. Rather than focusing on which foot to place forward, I like to find a comfortable, tall balanced posture: relaxed and efficient. You must consider all the angles of the arms, head, neck, flute and torso. The legs and feet need to support the body weight. There are plenty of options for 'correct' posture that work, and lots of players change stance (shifting foot placement)  mid way thru a performance. When seated, it's all about finding the correct angle of arms, neck, head, flute, and torso, with the additional angle created at the hip joint.  Hyperextension of the lower back is not desired when sitting. Keep reminding your students about good posture at every lesson so that their bodies learn great position naturally without paying attention to dogmatic ideas. Consider Alexander Technique or Body Mapping to become more aware of these issues in your own playing. Use a mirror, and encourage students to listen to their bodies so they can 'self correct'.


For more from Cindy, visit her website and Powell profile pages at:
http://www.cindyellisflute.com/
https://powellflutes.com/academy/masters/cynthia-ellis
Posted by Powell Flutes at 12:19 PM No comments: