September Payne recently sat down with Powell artist Raffaele Trevisani to discuss his training and tips for flute students.  We will post the interview in three sections, beginning with the first section below.  For more on Raffaele Trevisani, visit his Powell profile page at   https://www.powellflutes.com/academy/masters/raffaeletrevisani.

September: Raffi, during Sir James Galway’s 1996 summer flute class in Weggis, we discovered how similar our ideas were in regards to tone, embouchure, Moyse and the French school. I had the opportunity to get to know your teaching and playing further as your invited assistant in your Milan Summer class and through hosting your San Diego master classes. Your developmental musical path was an interesting one.

Raffaele: Yes, my approach to the flute was unique, possibly unlike anyone else’s. Although there was music in the house and I played piano at a young age, I didn’t start the flute until 20 years old. I enrolled in a special school that offered a course for amateurs in Italy.  From that point, I began practicing all day because I wanted to be the best. My philosophy was: if you want to play the best, why not study from the best?

At the time, Jean-Pierre Rampal’s beautiful tone and his fantastic way of tonguing was the model. Then Jimmy (Sir James Galway) came on the scene. For me, he had something more precise. Of course, musically I liked Rampal’s playing very much. If you listen to his recordings, his phrasing is crazy incredible but I liked Jimmy’s (Sir James) tone the best. I found Julius Baker’s tone interesting too. For me, these are the great flute players and of course Marcel Moyse, but I did not hear him live as you did.

The first time I heard Jimmy (Sir James) perform was 1978. His musical presence and vibrant tone shocked me. As a lighter player, I realized I had to change embouchure to get this tone quality. The transition was not easy to impose on a developing career but I persevered and experimented to get it, which is why I can automatically identify the problems with student playing.

To learn more, I followed Jimmy (Sir James) across Europe, listened to his concerts and all the things he had to say about flute and life. Even now as a professional, I still go to his summer class each year to listen and play! Without a doubt I was (and still am) his biggest fan!

Even if you are a natural, this doesn’t mean everything. Jimmy (Sir James) is and Jean-Pierre Rampal was a natural with the shape of the lips and they know what to do with the sound. This was also Marcel Moyse’s philosophy. Talent by itself is nothing if you don’t apply yourself. If the sound is not right, even if you have very fast finger technique, this is not good enough. You have to hear all the notes clearly. One must develop the total package like Jimmy (Sir James); all the notes always in focus, all the time, in addition to very fast fingers.

In many ways, I  consider myself lucky because I was not trained by anyone else so I was free to do what I needed to embouchure-wise and to follow Jimmy (Sir James) around the world, as you did {September} with Marcel Moyse. Although I went to Maxence Larrieux’s Geneva class, I never studied repertoire in the way one does weekly, lesson after lesson. No! I trained myself on my own.

September: Some people say you sound like Sir James:

Raffaele: I have my own style. Of course you can recognize the school of playing but I am proud to say I don’t imitate anyone.

More to follow in the second installment of this three-part interview... 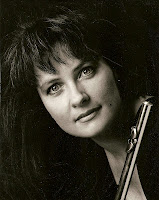