We featured Royalton Music Center in North Royalton, Ohio in one of our earlier posts, highlighting their music therapy program: http://www.teachflute.com/2012/12/healing-powers-with-royalton-music.html.  They also have a very busy lesson program for wind, string, and voice students.  Flute Instructor Linda Fisher recently shared her guide to purchasing step-up flutes with us.  Linda's guide was designed to answer some of the essential questions she receives from parents on the topic of step-up flutes.  We will share her guide in several posts, beginning with some of the essentials:

Question 1: Why does my child need a new flute?
That's usually the first question parents ask themselves when their child's teacher recommends a "step up or intermediate" flute.  Think of it this way, your budding musician has now reached the limitations of a student model -- that's great!  What limitations?  A flute is a flute, right?  Well, yes and no.  All flutes have three parts:

A headjoint – which is the part we blow across.

The body – where our fingers press the keys down (the middle section).  On an “open-holed” flute, the keys that our fingers press down actually have holes in them.  It’s hard to have bad hand position if you have to keep holes closed!

The foot – the bottom section of the flute.  On a step up flute, an additional key (B) is added – this gives the player access to notes that were not previously available on the student model.

Question 2: Why is the headjoint so important?
The part of the flute we blow across is the headjoint.  Eighty to ninety percent of our sound comes from this part.  One way to make the tone different is to make the headjoint out of a different material.  The first choice for step up flutes is to make the headjoint out of sterling silver.  Try this exercise, ring a silver plated bell.  Now ring a sterling silver bell.  Notice the tone on the sterling silver bell has a ring to it – almost a deeper, richer tone.  That’s the sound we are looking for in a flute.  But it doesn’t end there.  Some flutes have a higher content of silver than others.  Well, if it has more silver, then it’s better, right?  Not necessarily!  The best one is the one that sounds the best for YOUR flute player.

Posted by Powell Flutes at 12:35 PM No comments:

This article appears in Helen Spielman's upcoming book A Flute in My Refrigerator: Celebrating a Life in Music, which will be released in 2013. Helen is a performance anxiety coach who works with musicians around the world via phone or Skype, teaching them to perform consistently with focus, control, and freedom. You may visit her website at PerformConfidently.com   This article was previously published in Music for the Love Of It, June 1995 and is used by permission. 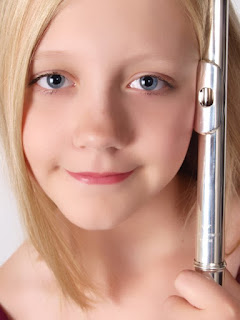 Apart from my orchestral and solo lives, I also enjoy aspects of educational work. After all, we all had to start somewhere, and as we get further on in our careers we have to think about the next generations. Because we are cheap to employ, most top end British musicians have played on Hollywood blockbuster films. I have two Star Wars and bits of the first two Harry Potter movies in my portfolio! Funnily enough, when I travel the world and am introduced as the principal flute of the London Symphony Orchestra for 20 years, there is polite acknowledgement. If however, I am announced as the flute player on two of the Star Wars movies there are huge smiles and great excitement! This is definitely something that connects more, in particular with younger people. So, it has made good sense to create a class that focuses on flute related problems, but linked into music from film sound tracks. In this way I have managed to attract people to come through the door to flute classes, who otherwise may well not have been interested.

A few years ago I was giving such a class at a school in Perth, Western Australia. There were
approximately 250 youngsters from the age of eight through to eighteen. In the front row there was a large group of eight to nine year old Australian boys, all from the same school. They all had very neat haircuts, kaki shirts and shorts, yellow ties and identical curved head flutes. If you were ever looking for a picture of innocence, this was it, in front of me! They were not only nauseatingly angelic, but they were also all incredibly well behaved.  The class was going according to plan and everyone seemed to be having a good time. We had worked on phrasing and articulation and now we were tackling top notes with a song, "Hedwig’s Theme," from Harry Potter. For those of you who don’t know, it is in g minor and at one stage goes up to a third octave ‘F’. As you can imagine, 250 youngsters with little flute ability playing a top F is what nightmares are made of. This group was no exception.

The top F arrived, was massively out of tune and caused everyone to stop in horror. I asked them, “What was wrong with that?”  Many hands went up and they all agreed that it was horribly out of tune.  “Any ideas as to how we can make the tuning better?”  There was a hushed silence as the class seriously thought about this, but no one had an answer. “Well”, I said, “we have to do a little flute trick here to help us and this involves making sure that the throat is nice and open. When I was your age, my flute teacher would tell me to make sure that my throat was open when playing and I would always nod my head in agreement, but in truth, I had no idea what he was talking about! So, when I say to you that we need a nice open throat, in particular in the top octave and for that top F, can anyone tell me how I am going to get a nice open throat?”  There was a short silence and then, very enthusiastically one of the little angels in the front row excitedly pushed his hand into the air. I was of course, thrilled to get a response, so I walked over to him and asked again: “OK. So, how do you think I am going to get a nice open throat?” “Oh, it’s simple, Sir. You just put a knife through it!” he said, not only with great relish but also with the visual addition of making a slicing action with his flute across his neck! For reasons that might be obvious to you, I haven’t been back to Perth since!

Posted by Powell Flutes at 2:52 PM No comments: