The Making of Flute N Float 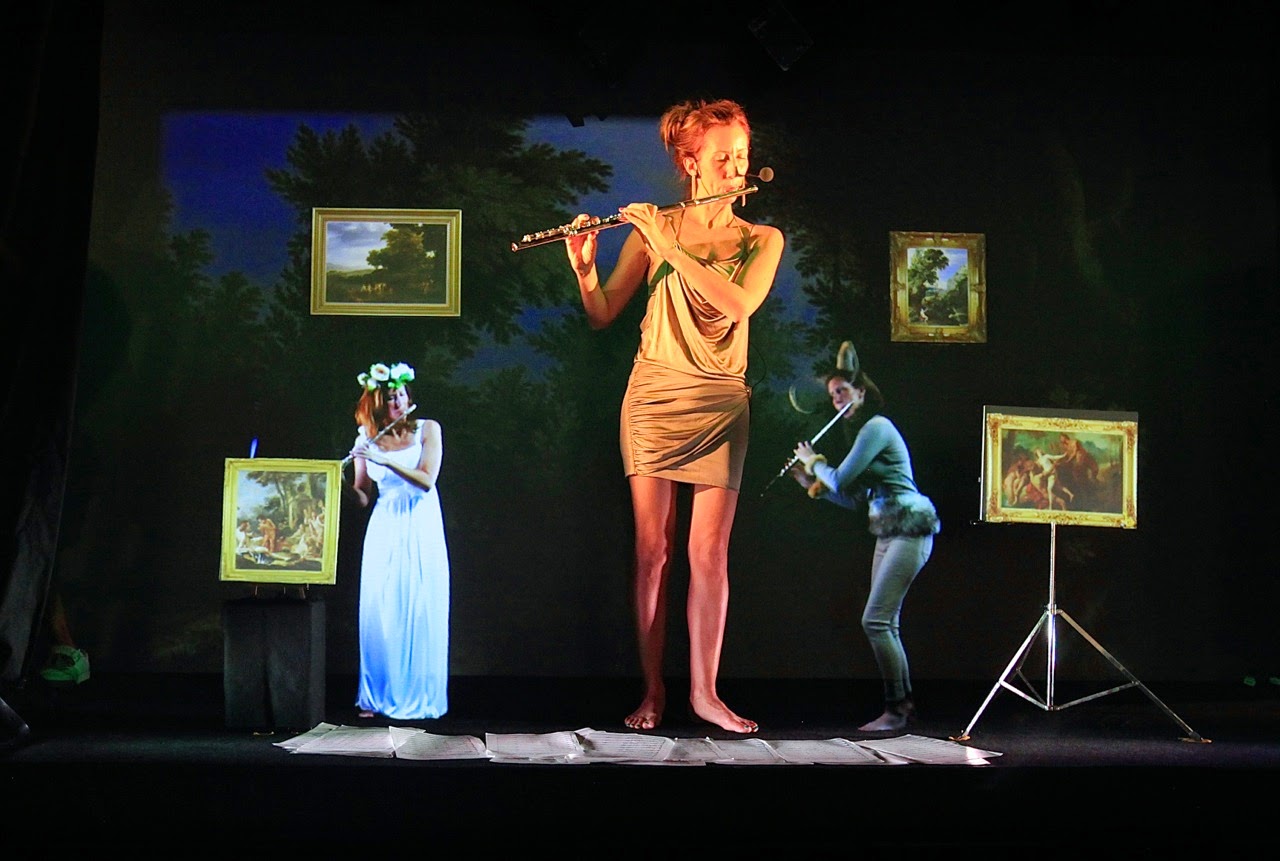 
(edited from “The Making of Hologram Fluterscooter,” originally published by The Flute View. August 2014.)

I had just finished performing my debut show at The Apple Store in Tokyo when I heard about the infamous 2Pac hologram at the Coachella Music Festival. After watching the YouTube video several times, and coming off an amazing performance where I involved a live light painter to create still and moving visuals as I played, I had an idea to take this performance to the next level: create a hologram of myself! and be able to play with and against a virtual version(s) of myself! What did that mean exactly? I didn’t know at the time how, where, when, who I’d be working with, but I was determined to make it happen!

Last fall, I finally decided it was the time to start working on this project. Now living back in the states, I started my online research about how holograms work. With all the buzz circulating about the 2Pac hologram, it was not difficult to find out what specific tech was used and how it was projected. It was also not difficult to find out how expensive it was to project a hologram for just 3 minutes. As an independent artist, finding $30,000 for a 3 minute performance didn’t seem worth it, but I didn’t let that discourage me. I began contacting all distributors of the Musion “Eyeliner” Technology (the technology that is needed to create the hologram effect) from New York to Los Angeles to their headquarters in London with a short description of my ideas as well as some sample pieces and my visions of how they would being performed. The London office was the most receptive and encouraging to me, recognizing the creativity in my project. Unfortunately the American companies just wanted money and weren’t interested…that was actually no surprise to me.

I was about to go to London and start meeting with the company to figure how to make my idea a reality, when I suddenly was called back to Japan for a month’s worth of concerts and teaching. They referred me to the sister company in Tokyo, StudioTED, and I showed them the press on my Apple Store show, and they were immediately interested in meeting with me while I was in Japan. I was so excited to start this project, even if it had to be in Tokyo!

My full show idea was over an hour long, where the visuals from each piece would melt into the next piece, creating a seamless visual and musical performance. Some music would be more traditional and contemporary flute music, and some would be commissioned by composers to write specifically for the event. After many meetings discussing how we could realistically put this show together, we decided to cut it to 20 minutes (4 pieces) and perform as a showcase in the studio showroom to attract sponsors and investors to book a larger show. Of course I wanted to do the full show, but the cost would have been very high for the company to put together and get a proper venue.

Fast forward to this past spring: I was back in Japan for more concerts (yes, I do most of my performing in Japan!) For the showcase, we chose Saint-Saens’ Aquarium which I arranged for 3 flutes, Robert Aitken’s Icicle, Debussy’s Syrinx (arranged for 3 flutes), and finishing with the first half of Steve Reich’s Vermont Counterpoint. Did I mention everyone in the company reads music and one is even a composer? That definitely helps with the process! Not all the pieces would be with hologram, but holographic content would be used for background visuals. We drafted up a visual storyboard of how and where the holograms would be placed on the stage.

We booked 2 days for a video shoot in their showroom, where I would record each hologram separately for each piece. I had to choose costumes for each one, too, so I also had to wear the stylist hat, too! My Syrinx costumes were obviously Syrinx and Pan, and one of the women on the team even made me handmade goat horns for the Pan costume.  Since it’s a visual performance more than anything, costumes, makeup, hair are of equal importance as the music. And since I don’t do my own hair, one of the team members happened to do hair, so I lucked out there too!

Now that the video shoot was done, we kept exchanging emails and having Skype sessions about next steps. Getting a solid invite list was the next step as well as starting rehearsals, so I booked another trip to Japan late this July (and just returned a few days ago) to have some meetings regarding invite lists and rehearsals. What most people don’t realize about the hologram effect is that when the live performer is on stage, they do not actually see the hologram; it is like looking into water and seeing reflections. I am doing some minimal choreography to interact with the other holograms, so getting used to looking down rather than across was a challenge!

One more trip to Tokyo was left, and this time it was showtime!  A few weeks prior to the show, I hired a project manager (and translator between StudioTED and myself) in Tokyo to bring some key people to the event, people that could potentially sponsor a bigger full show in a larger space.  The turn out was great, and without the project manager, it would have been difficult for me to get the proper people in the audience.

On September 25, 2014, I presented 2 showcases of Flute N Float as a private event in the StudioTED showroom in Tokyo.   I only arrived in Tokyo on September 23, and the 24th was a full tech rehearsal day.  We did everything from sound, interacting with the holograms (knowing their placement on stage in relation to myself), costuming, and cueing music.  It was difficult to do in such a short amount of time, especially to memorize where the holograms are on stage AND having to memorize the music.  On the 25th, we had dress rehearsals all day, and then presented the shows in the evening.  It was so much fun, and I’m honestly surprised it was pulled off without a hitch!

I recently had a conversation with Juilliard’s Entrepreneurship director about this show and the steps I had to take to finally make it happen…about doing whatever it takes to transform an idea into a reality, even if it means trips back and forth to Tokyo. As performing artists these days, we can use all of the world as our platform, our audience, and our collaborators. There are no limits!

The video of the full live show has been done, and it will be available for download on www.fluterscooter.com in November 2014.

Posted by Powell Flutes at 4:37 PM